"Have fun with it! No matter what the outcome is you are going to have so much fun running for a role and hopefully fulfilling that position. And support your peers, because it's not easy for everyone to broadcast themselves so it's very important to show support to who you are running against." 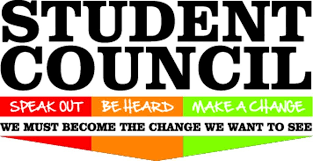 Not only is it a presidential election year, but it’s also time for our student council elections! Each year every office is up for reelection. Anyone in the student council can run, including members who already hold a position in office (as long as it’s a different position)! Because the candidates cannot give speeches to the whole school, they are recording videos and posting them on YouTube. A google form was sent out from May 12th to May 14th. Currently, the offices are held by President Blake Fraatz, Vice President Sarah Lopes, Treasurer Joe Bunch, Secretary Devon Mellon, and Art Director Anita Sousa. Currently, the people running are:

Only one person ran for senior class rep so congratulations to Evelyn Buffi!!

Have fun with it! No matter what the outcome is you are going to have so much fun running for a role and hopefully fulfilling that position. And support your peers, because it’s not easy for everyone to broadcast themselves so it’s very important to show support to who you are running against.

I was so nervous! Having to do a speech was the scariest part because I do not thoroughly enjoy public speaking. But It was such a fun experience and helped me get over some of that fear. Running against other people was very scary because I truly did not know what the outcome was going to be but it was such a fun and exhilarating experience!

During my junior year, I was the class rep and as much as I loved that, I wanted to have a bigger part in the Student Council. So I talked to Ms. Sweeney and asked what she thought and I also talked to one of my friends who had previously been President and they both were so supportive and really pushed me to run for president! So it was a very easy decision to make. I just needed a little push from my peers!

Becoming a member of the board starting in junior year helped me play a bigger part behind the scenes of all school events. I was able to be a part of student council activities and class activities. In my senior year, when I became Vice President, the part got bigger and it was and always will be the best experience of my high school career.

My biggest takeaway is the importance of what happens behind the scenes. People not in Student Council don’t get to see how all these shows and events come together and it was such a cool thing to be able to be behind the planning and organization of the many events that we hold!

The advice I would give to those running is it’s ok to be nervous, everyone is. Even if you don’t win it’s okay. Everyone is valued and you get your name out there for next year. When I ran last year I was so nervous, but sad I wasn’t able to give my speech due to a family emergency. I decided to run for treasurer because I wanted to make a difference in our school and make a difference for everybody. Being a member of the executive board changed my experience in high school because it’s not only the kids in your grade you get to know but also new people that can become your friends. We aren’t just a student council, by the end of the year we practically become family. I learned from being on the board how much dedication and hard work goes on outside of school hours.

For all the people running for board positions, I want them to know that even if you don’t win, it’s not the end of the world. I’ve lost two elections for other positions I ran for and both times I had student council members telling me to stay in the club. My plan was to stay in anyway, as I still adore StuCo, but it reminded me that I was a valued member of the team. So even if you do lose the election, stay strong!

No matter how many times I ran, I was still nervous every time. Student Council means the world to me and I wanted to prove it to everyone. I wanted to help make a difference in my school community.  If people had ideas I wanted people to be able to come to me or our meetings and share them. But getting up on the stage and hearing all of my friends clap and cheer for me really gave me that rush of adrenaline to power through.

Becoming a board member definitely helped me develop and build a lot of leadership skills over the years. It helped me a lot to come out of my shell that I entered during middle school. I’ve learned a lot of valuable lessons being in the Student Council, most importantly, that everyone’s hard work doesn’t go unnoticed.

Becoming a member of Student Council was one of the most important things I’ve done throughout my high school career. Miss Sweeney took on the position of StuCo advisor like a champ my Sophomore year and she’s done so much hard work alongside the rest of us for the benefit and joy of our high school students. I’m going to miss Student Council and Ms. Sweeney so much in college. I’ve made so many great friends and memories over the years that I’ll never forget. I can’t express how much my time has meant to me.  I hope my message inspires students to join in the future. And if it isn’t Student Council, then students should seek their passion. Whether it’s the radio club, drama, model legislature, or any of the other wonderful clubs offered by our school, I want someone to feel as passionately for something as I do for the Student Council.

Make sure to get out there and vote for student council elections! The future of our school depends on you!