Home Oakers Lacing Up for Hockey Season BY CONNOR MCKAIG

Oakers Lacing Up for Hockey Season BY CONNOR MCKAIG 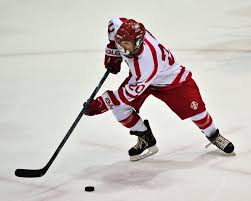 Oakers Lacing Up for Hockey Season

Winter has finally arrived, and for most students at CHS, that means the holidays will soon be upon us. But for a select group of dedicated athletes, there are no days off if they are to make it to Brown University in March. That’s because, in just a couple weeks, the CHS hockey team officially begins the season, ready to make a name for themselves in the highly competitive Division II.

Last season, the Oakers finished with a record of 7-8-1, falling just short of making playoffs. It was a year of adjustments for the team; many star players graduated, and the team hired a new head coach, Paul Nadeau, who had formerly been with North Smithfield. However, with a talented group of experienced seniors, this year’s team is not to be underestimated.

Over the past several months, the hockey team has worked hard to improve their performance on the ice. For example, starting this summer, they have met twice a week for weight training sessions at the school. Attendance has been high throughout, demonstrating the boys’ will to become stronger to be top competitors in the division.

However, despite the intense preparation for the coming season, there are still some issues to be sorted out amongst the team. This year, there are more players than there has been in years, a sizable chunk of them freshmen. For this reason, the creation of a Junior Varsity team has been debated between the coaches and the league. If a JV team is formed, it will most likely drastically alter how the team is able to operate, affecting everything from practices to the beloved team pasta parties.

As of now, the JV team is not confirmed, so players are focused solely focused on the games ahead of them. After all, for the seniors, this is their big year, and last chance to make it all the way to Brown University for the championship in March. To see the Oakers’ schedule, visit the Rhode Island Interscholastic League website. Be sure to come to the games this season!