Home Top 12 Films to Watch during Quarantine By TIARA ROCHON

Top 12 Films to Watch during Quarantine By TIARA ROCHON

During our time in quarantine, many are looking for new movies to watch to occupy our time. I have compiled a list of films (in no particular order) from late 2019 into early 2020, as well as some films that have been delayed due to COVID-19 for your consideration. Check them out! 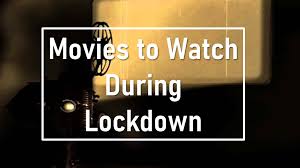 Top 12 Films to Watch During Quarantine

During our time in quarantine, many are looking for new movies to watch to occupy our time. I have compiled a list of films (in no particular order) from late 2019 into early 2020, as well as some films that have been delayed due to COVID-19 for your consideration. Check them out!

This story begins at the death of crime novelist Harlan Thrombey. His death looks to be a suicide, but when Detective Benoit Blanc is hired to investigate, Harlan’s death becomes more suspicious. Everyone in Harlan’s family is a suspect, including Marta Cabrera, Harlan’s nurse and the main protagonist of the story. Blanc and Marta set out to find the truth. The mystery and story are constantly compelling and reveals a new twist at each turn.

This story follows a lonely 10-year-old German boy, Johannes (nicknamed ‘Jojo’), during the final year of World War II. His imaginary friend, Adolf Hitler (played by director Taika Waititi himself) acts as an aid in his fascism as well as a crutch of support. When Jojo discovers that his mother is hiding a Jewish girl in the walls, he must confront his nationalism and ideals. This film sends a beautiful anti-hate message and will make you laugh, cry, and appreciate things a bit more in life.

This story is a new retelling of Batman’s famed enemy, the Joker. The story follows a failed comedian named Arthur Fleck who lives in Gotham City. He works as a party clown, but a few unfortunate events lead to his descent into true madness while still trying to balance a ‘normal’ life while taking care of his mother. This film conveys a powerful and chilling message about society and how it handles mental health issues and topics.

Rating: PG-13 for violence and action

Despite being believed to be dead, it is found that Darth Sidious/Emperor Palpatine survived. The rebel alliance must find where he is located, with Finn and Poe leading the Resistance to stop the new Empire from forming. Rey must continue her journey to find her heritage and face Kylo Ren. This story is the end to the story of the Skywalker family, that started 42 years ago in 1977.

Rating: R for disturbing and violent content, some bloody images, language, nudity and drug use.

Many years after the events that took place in Stephen King’s “The Shining”, young Danny Torrence has grown and struggles with alcoholism and being traumatized. His want for a normal life is disrupted by a teen, Abra, who shares the ‘shine’ with him. Together they have to work together to battle the True Knot cult who feed off of the ‘shine.’

Rating: R for language throughout and sexual references.

Charlie Barber, a stage director, and Nicole Barber, an actress, struggle through their damaged relationship and eventually a rough divorce. They both want custody over their son and are pushed to their own personal extremes. This film’s tagline is “Where there’s a love, there’s a way.”

Thirty years after her hit role as Dorothy in the 1939 film, “The Wizard of Oz”, singer-actress Judy Garland performs in London at the ‘Talk of the Town Nightclub.’ She reflects on her life with friends before entering a relationship with Mickey Deans, a musician, who would be her fifth husband. This film tells the tragic story of the life of Judy Garland which leads up to only six months before her passing at the age of 47.

After Gretel and Hansel’s mother becomes mad, the two siblings head into the dark wood in search of work and food. They come across an isolated home within those woods, and are invited in by a friendly owner. The woman’s suspiciously friendly behavior is revealed to be a dark and sinister plan. This film is a retelling of the already dark tale of ‘Hansel and Gretel’ and spins an empowering feminist tale.

After Sonic finds himself on Earth, he accidentally knocks out the power grid with his speed. This attracts the attention of Dr. Robotnik. Sonic befriends Tom, a human, and the two must work together to keep Dr. Robotnik from taking over the world by using Sonic’s power. This film brings many childhoods to the big screen in live-action with a new story to the franchise.

Rating: R for strong violence and language throughout, and some sexual and drug material

After Harley Quinn and the Joker break up for good, she learns that many others are out for her in Gotham City. Harley faces the wrath of crime boss Black Mask and Victor Zsasz when she’s in hiding and on the run. After a target is placed on Cass, a young girl, Harley teams up with Huntress, Black Canary, and Renee Montoya to save her and take Black Mask down. This film presents the empowerment of women, as well as being a good DC Superhero/Supervillain film.

Rating: PG for action/peril and some mild thematic elements

Set in a modern fantasy world, two teenage elf-brothers, Ian and Barley Lightfoot go on a magical journey to attempt to spend one more day with their late father who died when they were young. After they go missing, their mother, Laurel, teams up with a manticore to bring her boys home. This film tells the story of the celebration of life and family.

This film is an adaptation of “Emma.” by Jane Austen. It follows the antics of Emma Woodhouse who lives in Regency-era England and spends her time matchmaking, which is commonly in a misguided or meddlesome way. This film delves into the pains of social class and maturing.

Ten 2020 Films That Have Been Delayed