A SHARP ‘KNIVES OUT’ COMMENTARY (Contains Spoilers) BY TIARA ROCHON

Knives Out radiates “Eat the Rich” energy. Those who have the money to go through with their power will only do so if it directly benefits them. The focus on the positive traits of a strong Latina lead sets a great example of the most powerful traits in women. Overall, Knives Out was ‘criminally’ pushed aside during awards season but only received the best of reviews for the topics they cover and the plot. 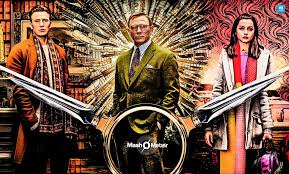 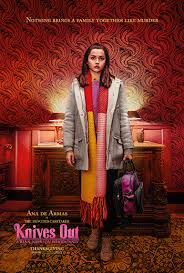 Knives Out is a 2019 mystery film directed by Rian Johnson. It holds an expansive cast of many characters, interesting storylines, and beautiful cinematography and sets.

After crime novelist Harlan Thrombey (Christopher Plummer) is found dead the day after his 85th birthday, a rather interesting plot unfolds throughout the Thrombey household with Harlan’s nurse, Marta Cabrera (Ana de Armas), a young woman who can not lie without throwing up, at the center of it all. Enter Benoit Blanc (Daniel Craig), a southern drawled-detective who was mysteriously hired to work along with the local Massachusetts police to solve the case. The plot of this thriller-comedy may have you sift through a tangled web of clues and lies from the Thrombey family and staff, but it also brings light to multiple political topics.

Marta Cabrera is a hardworking young Latina woman who worked as Harlan Thrombey’s nurse. She was a close friend to Harlan and is the daughter of an undocumented woman. As a Latina woman, Marta is not over-sexualized, like many Latinx people are in modern media. Of course, you cannot avoid the fact that Ana de Armas is an attractive actress, but the film does a lovely job of not making her hypersexualized. Marta is always dressed in comfy sweaters and is always seen in little to no makeup. She prioritizes her role as Harlan’s caretaker and friend and always has a kind heart, which is a predominant trait within her. Not only is she not over-sexualized, but she also does not have any form of a love interest in the other two male leads (Benoit Blanc, played by Daniel Craig; and Ransom Thrombey-Drysdale, played by Chris Evans). Marta proves herself to be a strong and courageous woman throughout the Knives Out story.

A larger topic covered in this film was the hypocrisy and class prejudice the Thrombey family displays. Although Marta is quickly revealed to be the one who accidentally gave a lethal dose of morphine to Harlan, she is morally superior to each member of Harlan’s family.

As the story unfolds through police interviews with the Thrombey family, it is revealed that each person (blood or marriage related), excluding Harlan’s mother (K Callan) and Walt’s son Jacob (Jaeden Martell), had a motive to kill Harlan (“Hell, any one of them could have done it”). Linda (Jamie Lee Curtis) wanted to control her father’s inheritance, Linda’s husband, Morris (Don Johnson), was threatened by Harlan’s threats to expose Morris’ affair to Linda, Walt (Michael Shannon) had just been fired from his father’s company after trying to make a larger profit from Harlan’s novels, Joni (Toni Collette) was exposed for embezzling money from her father-in-law’s funds for her daughter, Meg (Katherine Langford) was no longer receiving funds for college thanks to her mother’s embezzlement, and Ransom (Chris Evans) was cut out of his grandfather’s will for relying too much on Harlan’s money. They are all self-serving and always picture themselves by Harlan’s side during flashbacks. It is clear from the beginning that the family does not get along, no matter the relation to each other. Some are moderates, some are liberals, some are conservative, and some members of the family go to the lengths of calling Walt’s son a ‘nazi child’.

The family’s debate over illegal immigration drags Marta into the conversation. Morris states that Marta’s family did it ‘the right way’ (which her mother, did not do) and that she is a hard worker. Ironically, Morris procedes to hand Marta a plate to take away as he calls her hardworking. Each one claims to care greatly for Marta, but commonly names the wrong country she and her family are from (Paraguay, Uruguay, Ecuador, and Brazil), as well as saying they wanted her at Harlan’s funeral but were outvoted by the others. Their left-handed comments to console her are thrown out the window after they learn that Harlan left everything he owned and possessed went to her. Despite their differences, they gang together to scare and threaten Marta with the deportation of her mother and sister and all the lawyers they have control over. Ransom pretends to be Marta’s friend just to rat her out to the detectives to avoid his arrest and to gain his inheritance from Harlan’s outdated will. Ransom, in frustration states, “We allowed you into our home. We let you watch our granddad, we welcomed you into our family. And now you think you can steal it from us? You think I’m not gonna fight to protect my home, our birthright, our ancestral home?” Detective Benoit Blanc retaliates with the fact that Harlan had bought the house in the 60s and that the family had no rights to the home.

By the end of the film when Ransom is arrested for tampering with the medication Marta gave to Harlan before he died, Morris attempts to bribe the police to save his son, ultimately going against his opinions on breaking the law. Overlooking the family’s despair, Marta stands on the balcony holding Harlan’s old mug that says “MY HOUSE, MY COFFEE, MY RULES”, with her fingers just low enough to show “MY HOUSE” to the family. Despite their threats and the arrest of Ransom, the Thrombeys do not fall through with their threats of deportation due to learning that Marta would not give up to fight for what she thought was right. Although the Thrombeys make their claims and threats, the hypocrisy and carelessness in their statements shine through. Them stating the wrong nationality for Marta and the forgotten threats of deportation is not the joke, but their ignorance is. Knives Out radiates “Eat the Rich” energy. Those who have the money to go through with their power will only do so if it directly benefits them. The focus on the positive traits of a strong Latina lead sets a great example of the most powerful traits in women. Overall, Knives Out was ‘criminally’ pushed aside during awards season but only received the best of reviews for the topics they cover and the plot.

Get Ready for Spirit Week! BY CONNOR MCKAIGWorried about the SAT? By Zachary Preiss