"Rehearsals are going pretty well. It's moving a lot faster than I expected," says Erin Gagnon, who will play Anne Frank. "We're done with blocking, so we're focused on working with our lines right now and I already have a lot memorized. We're also getting our props together. It's a lot but it's not too much to handle. Everyone gets along really well and our stage chemistry is good." 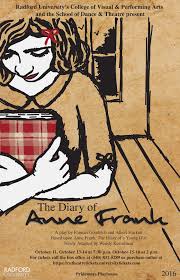 A Preview of CHS Drama’s The Diary of Anne Frank

The CHS Drama Club’s annual spring play is officially in production. After last spring’s The Diviners and the successful Pippin in the fall, CHS Drama promises a fantastic return to the stage. This spring awaits an adaptation of the drama The Diary of Anne Frank.

The source material, The Diary of Anne Frank, written by Frances Goodrich and Albert Hackett is a play adaptation of The Diary of a Young Girl by Anne Frank that premiered at the Cort Theatre on Broadway in 1955. It won the Tony Award for Best Play and the Pulitzer Prize for Drama.

Recently, The Entry got to ask a few cast and crew members about production.

“Rehearsals are going pretty well. It’s moving a lot faster than I expected,” says Erin Gagnon, who will play Anne Frank. “We’re done with blocking, so we’re focused on working with our lines right now and I already have a lot memorized. We’re also getting our props together. It’s a lot but it’s not too much to handle. Everyone gets along really well and our stage chemistry is good.”

“Rehearsals are going fairly well,” says Emma Horan, who will play Petronella Van Daan. “Everyone’s getting their lines pretty quickly. Blocking was a bit tedious, but otherwise, everything is pretty much ok.”

“I haven’t been to many rehearsals, but they’re very streamlined and always get the job done. They’re very professional in that aspect,” says Parker Frenze, who will play a Nazi soldier.

“It’s really going well on the tech side, too,” says Lucy Colby, the production’s props master. “I’ve never been on the backstage side before, just acting, but I really enjoy it! I still get to hang out with the cast and be a big part of it. I really enjoy props because you get to make a ton of lists and organize everything constantly, which is the way my brain works anyway, and you get to make new friends! It’s really stressful at the beginning, but it’s helping me with time management, and I’m excited for it to get smoother as everything comes together.”

Prevalent with previous productions by CHS Drama teacher and director, Mr. Wilkinson, the play’s content is disconcerting. However, the cast and crew affirm that this play is among their most important. The account of Anne Frank is perpetually significant in its social message and its historical context.

Colby addresses this. “The Holocaust is an intense topic and one that you absolutely have to execute well. We have a responsibility, and that responsibility plays into the way we handle things. I personally want to bring awareness to everyone who sees the show.”

“Since she was a real person, I feel pressured to portray her the right way,” admits Gagnon about her role. “Everyone knows Anne Frank and it’s hard to execute properly since she had such a hard life and legacy.”

“It’s been 80 years since the Holocaust. Presenting this is a good way to educate our generation about this grim era,” says Horan. “It’s crucial that even now, we remember what happened during the Holocaust.”

“This district has the Holocaust in its curriculum, however, I think seeing it come to life on our stage is more engaging for not just teenagers, but people of any age,” adds Colby. “I hope the people who come to see our incredible actors portray brave people are touched emotionally and leave with more than just a program. I hope it makes at least a small impact because we can never let something like [the Holocaust] happen again.”

“It’s a big period piece that reflects the time period,” says Frenze. “For modern times, it gives perspective on how things could happen and how teenagers are able to process things.”

“Our wonderful director, Mr. Wilkinson, is amazing at his job and I have complete faith and awe for the way he runs rehearsals, makes sure everyone is doing everything to their best ability, and that we are doing the Frank and the van Pels families as much justice as humanly possible,” says Colby.

So far, the outcome looks promising. “Anyone who comes to see it will be greatly moved,” assures Erin Gagnon. “Even though there are some light-hearted moments, it’s going really well. It’s not too long and it’s probably one of the better productions. It’s good not just for those interested in the Holocaust. It’s about a girl and other people, so anyone can relate to their stories in so many different ways.”

The play’s cast and crew express camaraderie, zeal, passion, and talent, all of which will pay off. “I’d say we’re vibing,” says Noah Babbitt, who will portray Albert Dussel.

Coventry Drama’s performance of The Diary of Anne Frank will debut from March 19–21, 2020, at the Coventry High School Auditorium.

A Conversation with the Science Fair Winners By Inés Alba VázquezAre You Ready to Take the Plunge for a Unified Cause? BY GRACE PETRARCA