Wayward Son by Rainbow Rowell is the young adult fantasy fiction sequel to Rowell’s Carry On. It was published on September 24th, 2019, and is 352 pages long, with 64 chapters plus a prologue. The story picks up roughly a few years after the events of the previous book. (From this point this review contains minor spoilers) 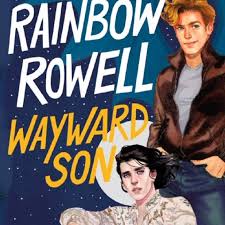 Does this series ‘Carry On’ on with a good storyline?

Wayward Son by Rainbow Rowell is the young adult fantasy fiction sequel to Rowell’s Carry On. It was published on September 24th, 2019, and is 352 pages long, with 64 chapters plus a prologue. The story picks up roughly a few years after the events of the previous book. (From this point this review contains minor spoilers).The main character, the cherry scone loving Simon Snow is struggling to deal with his life now that he has gained wings and lost his magic. His best friend and flat-mate, the intelligent Penelope Bunce springs a trip to America to visit their friend Agatha and Penelope’s boyfriend, Micah onto Simon. Although uncertain, Simon’s boyfriend Baz Grimm-Pitch complies to tag along with them. During this adventure, they face many trials and tribulations of no longer being on the safer side of the ‘magickal’ world while they try to put their trauma from saving the world behind them. Compared to its predecessor, this book takes a more serious tone with its topics.

Compared to the first book, this book is different on multiple levels. Each character that we had grown to love (or dislike) in the first book that ‘carried on’ into this tale had faced their own problems and trauma that came with trying to ignore their past. Baz continued to face his life as a vampire and how it affects others and his staggering relationship with Simon. Simon struggles with Baz and Penny’s optimistic look towards the future, his life with wings and a tail but no magic, and depression. Penny deals with her relationship and a loss of order in her life. Agatha deals with desperately trying to escape and avoid her life back in England, along with the ‘magickal’ world altogether. Each of these tribulations contributes to the evolution of these characters.

Although Simon is the main protagonist of this series, Penny and Baz were more in the story, while Agatha still remained on the side. It was interesting to see more of Penny’s complex thoughts and emotions as she breaks multiple ‘magickal’ laws. It was also interesting to see more of Baz, considering we did not see his perspective for the first thirty chapters of the first book. Baz’s mission that takes place in the second half of the book is also nice to read, especially since he is discovering many new things about vampires that he had not previously known.

The response to this sequel has been greatly mixed. Some were happy with the book’s plot, while others struggled to enjoy the book to its full potential. Of course, fans felt the pain that each character was going through due to a great sense of connection to these diverse characters, but some could find themselves not enjoying a character as much during this story. The American ‘magickal’ system was interesting, but some fans wished it were more entertaining even though it was presented as an obstacle for the characters.

Overall, Wayward Son is a well written young-adult novel that continues to present new challenges while still maintaining wonderful characters.  If you do enjoy this series, keep an eye out for the third installment that was just recently announced, Any Way The Wind Blows.