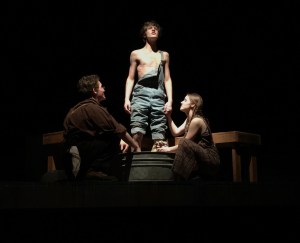 The full Drama Club (we refer to it as CoventryDrama) officially meets as a club only 3 or 4 times during the school year because the nature of our activities goes on after-school most all weekdays and some weekends from September until March or April every year. We have won 5 state Drama championships, scores of acting and technical Theatre awards, and have been formally acknowledged at a variety of school board meetings.  We have performed the world and U.S. premieres of several shows. We have been nominated 19 times to represent Rhode Island at the annual American Theatre Festival in Ireland. 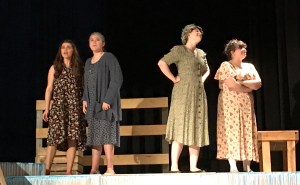 The mission of the Coventry High Drama Club is to offer challenging creative opportunities in a professionally-minded, positive theatrical environment.  We seek to educate both the students and the community about the theatrical arts through productions and activities that enhance the educational goals of the theatrical discipline. This club offers a supportive outlet for self-expression, assists in building confidence, strives to increase self-esteem, and offer students the opportunity to stretch the imagination. Involvement in drama club activities teaches responsibility, requires commitment, and fosters a sense of community and collaboration while developing new friendships with an expanded awareness of other cultures and of other lives.  All students are a great fit for Drama Club because they each have a variety of talents, skills and perspective that contribute to our productions. In turn, Drama contributes to their lives. We are indeed, the Drama Family.

We offer three different Drama Classes–Intro to Drama, Advanced Drama, and Play Production.  The skills you learn will carry value throughout your life.  Drama helps you . . .

Primarily we make life-long memories and have fun while creating very good art!  We normally produce two productions in a variety of genres (comedy, drama, musical, mystery, etc.) a year, one in the fall and one in the spring.  The auditions for both on-stage and off-stage roles/positions are open to all students of CHS.  We also have often participated in other events, such as First Night, Community Night, Varsity Review, Historical Society Ghost Tours, Field of Screams and fund-raiser events.  We typically end our year with the “Drama Club Awesome Cook-out and Award Ceremony” where we announce the next’s years shows.

For more information on this club,  stop by room 502 and speak with Mr. Wilkinson.